After surviving an IED explosion in combat overseas, Marshall Bennett, played by Michael Roark, a young soldier in the Army Ranger Motorcycle Unit is medically discharged and told that one more accident could mean he may never walk again. When he gets home to his family farm, he discovers that his dad, played by Trace Adkins, is behind in the mortgage and may lose the farm. Against all odds, Bennett pledges to help his family by the only means he knows how… to get back on his bike and do what he does best.
Rating: PG-13 (for some language and brief violence)
Genre: Drama
Directed By: Alex Ranarivelo
Written By: Alex Ranarivelo
In Theaters: Aug 30, 2019 Limited
Runtime: 95 minutes
Studio: Forrest Films

We’re gonna lose the farm, son!” husks country star Trace Adkins (twice, even) in the trailer for “Bennett’s War,” which then goes on to further suggest the viewer is in for a steaming pile of platitudinous corn, with a side order of flag-waving. And indeed, Alex Ranarivelo’s sports drama has a pretty hokey story gist: Wounded military veteran forces himself to miraculously recover his full mobility so he can return to motocross racing and get that prize money to … yep, save the family farm.

Maybe such on-the-nose marketing works for some Heartland audiences, but the good news about that bad trailer is that it does this film a disservice. While “War” may be a duly formulaic feel-gooder at heart, it also soft-pedals the more potentially heavy-handed emotional beats to pleasing effect.

Modest but enjoyable, with some exciting race footage, it should provide an inviting alternative for audiences on the lookout for inspirational family-friendly fare who’ve already seen the more overtly faith-oriented “Overcomer.” Forrest Films (whose next Ranarivelo joint, BMX biking-focused “The Ride,” hits theaters this December) is releasing it on just under a thousand U.S. screeners without much competition from fellow newcomers this Labor Day weekend.

MORE REVIEWS
Venice Film Review: ‘Guest of Honour’
Venice Film Review: ‘Balloon’
A relatively short prologue shows protagonist Marshall Bennett (Michael Roark) as a U.S. Army sergeant serving with a Rangers’ motorcycle unit in Afghanistan. Escaping enemy fire, he and best bud Riley (Michael King) suffer a trip-wire explosion and are both hospitalized with major injuries. Marshall is lucky to get away with as little damage as he does. But he’s told his stint in uniform is over — and most likely his riding days as well. This is a bitter pill, as he’s a former competitive motocross champion. Nonetheless, there’s plenty waiting for him at home in California, where wife Sophie (Allison Paige) has just given birth to their first child.

Using canes to get around and undergoing physical therapy for his damaged leg, Marshall keeps his hand in the sport a bit by working as a mechanic for friend Cyrus’ (producer Ali Afshar) “Moto Mischief” business. The second he begins to feel sensation in his wounded foot again, he’s determined to go back to racing — if only because, yes, grandpa Adkins’ over-mortgaged farm is at risk.

This requires convincing resistant Sophie, who’s afraid another mishap might leave him in a wheelchair. It also rapidly places them in opposition to a high-flying competitive team managed by Tony Panterra (playing himself), whose stars are “entitled pr—s” Chris (Hunter Clowdus) and Kurt Walker (Brando Eaton). The brothers do not take well to losing. And as our hero soon learns, they’ll resort to dirty tricks when that’s a threat.

Ranarivelo’s straightforward script sports its fair share of dialogue as well as overall narrative clichés. But his nimble direction doesn’t underline them, and the brisk pace makes this simple story go by too quickly for it to feel belabored. If the result is ultimately unmemorable, it’s nonetheless solid, like an entertaining bottom-half-of-the-bill “B” actioner of yore.

Needless to say, the highlight here is lots of impressive racing footage and stunt work, with plentiful slo-mo capture of riders’ “hang time” — those breathtaking airborne moments during jumps. It’s particularly disappointing, then, that the weakest element in “Bennett’s War” is its visual quality, not so much in DP Rueben Steinberg’s creditable compositions but in the very viddy digital look overall. Perhaps if this enterprise raises their profile at the box-office, the production companies’ busy schedule of upcoming sports-themed features can start upgrading their otherwise competent packaging elements’ surface gloss a bit.

Handsome Roark makes a likable protagonist, gravel-voiced Adkins provides gruff warmth, and Afshar adds deft light comic relief. Like Panterra, Afshar is also an offscreen figure of note in the actual motocross world. Unlike them, the other name riders and scenesters more briefly featured here announce their “real person” status by having that conspicuous air of “I’m not an actor, what am I doing here?!” awkwardness. 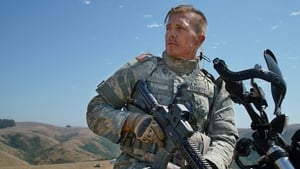